Police raid of a dispensary during times of cannabis shortage in Canada seems counter-intuitive. Where does that medicine go?

Late last year, Canada became the second nation to legalize cannabis for adult use. Over the past few months, the country’s cannabis sales looked paltry when compared to US states like Colorado and Nevada, and experts predicted a supply shortage that could continue for years. So how did the Canadian police respond to legalization? They began to raid and bust dispensaries.

In October of last year, the Royal Canadian Mounted Police (RCMP) raided five Toronto dispensaries. This occurred just two days after the nation launched its first legal recreational cannabis sales. According to the RCMP, the raided pot shops operated in violation of the law. Only one online retailer, the Ontario Cannabis Store, operates with legal licensing in Ontario – for now. Private sales from independent operators are set to begin April 1, 2019.

Dispensaries Operating For Years Before Crackdown

In Canada, certain dispensaries operate under government sanction through special licensing. However, because Canadian law states that access to medical cannabis is a legal right, not a privilege, non-government sanctioned dispensaries believed they operated in accordance with national law. Until recently, many of these dispensaries went ignored by law enforcement.

However, in an era of legalization, governments often enforce regulations with more vigor than prior to legalization. To establish a new order, governments feel they must prove that cannabis is not 100 percent legal. In the end, the government remains the ultimate arbiter of cannabis, whether it enforces prohibition or exercises some kind of regulatory leniency. We saw this unfold in Colorado, Washington, and California over the last several years.

Shortly after October’s police raid policy in Ontario, 56 non-licensed dispensaries willingly closed their doors. Some of these dispensaries are awaiting licensing from the government. Regardless, each of these locations sat on piles of viable cannabis during a period when the country’s supplies are running dry.

Where Does the Seized Cannabis Go?

“Seized property and/or cannabis is generally destroyed after the conclusion of legal proceedings,” wrote Cpl. Caroline Duval in an email to RxLeaf. Duval serves as a media relations officer for the RCMP.

Duval noted that enforcement, court processing, and the ultimate handling of cannabis cases is “dependent upon what legal instrument (the Cannabis Act, the Excise Act, provincial/territorial legislation, municipal or tribal by-laws) applies or which legal instrument the police officer elects to use in each case.” This is because Canada, much like the US, governs legal (and illegal) cannabis under a patchwork of legal frameworks established by both the national and local governments.

However, the RCMP isn’t the only law enforcement organization responsible for handling cannabis dispensary cases. Other police agencies also have jurisdiction, again dependent on which laws are being enforced.

“The big issue is that the quality, for one, isn’t on-point, and supply is always sold out,” said Kyle, a non-licensed Canadian cannabis dealer. “This leads the consumers to go black market which is pushing the black market even more.”

Kyle claimed he could connect patients with high-quality cannabis at half the price offered by dispensaries or retail stores.

“Craft quality is huge. No till growing, all organic,” he said. “It is almost becoming like miniature brewery companies that all have their own niche.”

Where do black marketeers get their cannabis? Some receive their supplies from product diverted by dispensaries, namely the non-licensed dispensaries. Others simply grow secretly in homes, storage areas, or warehouses.

Ironically, if Canadian police diverted cannabis seized from non-compliant dispensaries into licensed businesses, they could alleviate some of the shortages. Unfortunately, doing so could be seen as government-sanctioned theft, on par with (potentially unconstitutional) civil asset forfeiture in the United States. 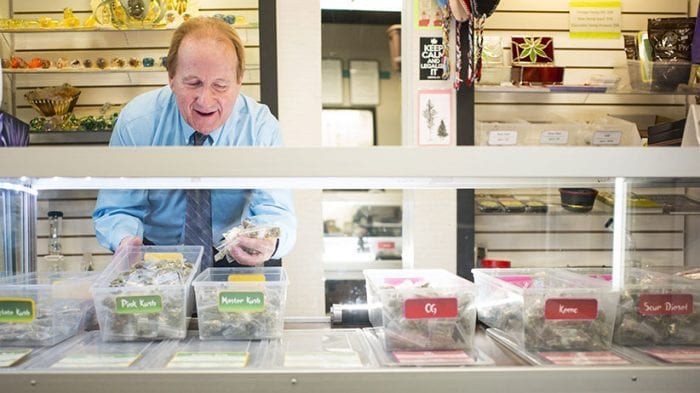 Don Briere, the owner of the Weeds Glass and Gifts chain (John Lehmann/The Globe and Mail/CP)

Are Patients The Real Losers in a Dispensary Police Raid?

While a handful of licensed cannabis companies may hold virtual monopolies in their respective regions, ultimately, it’s the patients who lose out on these police raid policies and shortages.

Don Briere, Canada’s King of Cannabis, owns more dispensaries than anyone else in the country. He has also dealt with multiple raids and charges over the years, the most recent occurring last year in Surrey.

Briere said the police raid policy wastes tax payer resources while unfairly punishing business owners who are simply trying to service patients in areas where conventional medicine has failed. He cited the opioid crisis as one battlefront where cannabis offers options available nowhere else.

“We treat all kinds of patients with every condition you can think of,” he said. “That’s what we’re here for, to help patients.”

Briere mentioned cannabis dispensaries – whether operating with a government license or not – combat the black market. Given Kyle’s account, it seems the police raid policy and shortages are doing exactly the opposite of what legalization’s intention: regulate cannabis and rid us of black marketeers.

Currently, Briere is suing the Surrey government for what he sees as government overreach and interference into an otherwise law-abiding operation. Despite the police raids, he anticipates he will receive licenses to open more stores, even as the government claims that he overstepped regulatory boundaries.

Will Canada rise above its current hurdles? Hopefully it will, and soon.