Research shows that cannabis can treat psoriasis, and not just the physical symptoms. All of it. That means depression and anxiety, too.

Cannabis treats many of the symptoms associated psoriasis. Further, it may even help its underlying causes, according to a literature review published in Current Clinical Pharmacology (2016).

The secret is how cannabis interacts with the endocannabinoid system, a subunit of the body’s central nervous system, in order to calm nerves and limit the skin cell growth responsible for psoriasis.

The Science of Psoriasis

Despite what many people think, psoriasis is not a skin ailment. It’s an auto-immune disorder, which means it develops from the body attacking itself.

In psoriasis sufferers, the body’s T cells — the fighting blood cells that shield the body from bacterial invasions — get mixed up and attack normal, healthy skin cells. When this happens, white blood cells respond to invasion to fight the T cells. This causes inflammation.

In further response, the body’s natural defense works to replace the inflamed skin, sending in new replacement skin cells to the damaged area at too-fast a clip. The excess skin accumulates in patches of thick dead skin cells that hit the skin surface before they’re mature. That leads to the itchy, painful, feelings of psoriasis.

The root cause of psoriasis is mysterious. It’s genetically handed down, but the exact mechanism by which it works is still debated. 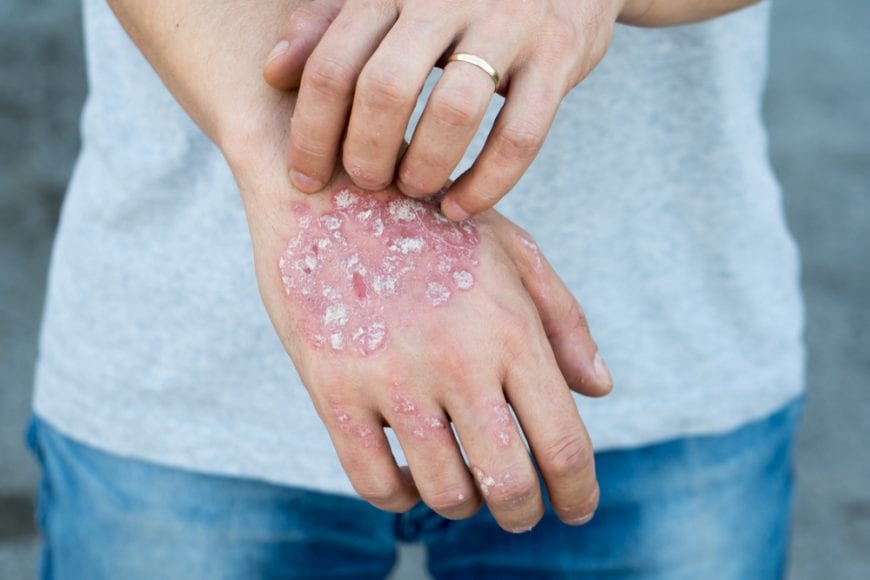 So how can a substance treat a disorder whose root cause is unknown?

First, cannabis treats the symptoms of psoriasis. Thanks to CBD, cannabis has powerful anti-inflammatory powers, which help to soothe irritated skin and calm down breakouts.

Cannabis also treats the pain associated with psoriasis. Both THC and CBD work on receptors in the brain that manage the body’s understanding of pain. Through the endocannabinoid system, cannabis helps to dull the body’s feeling of pain and release consumers from the agony associated with skin irritation.

RELATED  Seniors and Cannabis: How We Can Still Do Better

To calm the skin conditions associated with psoriasis, cannabis topicals are effective and powerful medicine. They can even be made at home.

But that’s not the only way the plant could help. Cannabis also treats the secondary symptoms that accompany the disorder. The painful and itchy patches of skin are only the surface scars of a psoriasis diagnosis; sufferers often carry a mental burden as well.

People living with psoriasis have higher likelihoods of experiencing anxiety, depression, and suicide than average. According a study published in the Archives of Dermatology (2010) psoriasis patients have a thirty-nine percent higher risk of depression than those who do not have the disease.

Cannabis has excellent anti-depressive properties. The compound CBD in cannabis induces fast-acting and long-lasting anti-depressant effects after even a single dose, according to research published in Molecular Neurobiology (2018).

Clearing up a chronic skin condition is great, but the disorder also plagues the mind. In addition to cannabis as topical medicine, CBD edibles or oils can be a good way to take care of patients’ mental health.

And it’s not just depression! The same study about depression showed that people with psoriasis have a thirty-one percent chance of receiving a diagnosis of anxiety. And that’s just the people who visit a doctor. There are probably many more who suffer silently.

Luckily, cannabis helps that too. Using cannabis for anxiety is one of the best-established medical benefits. CBD naturally calms people down, helping them sleep, relax, and feel at ease in social situations. No matter which form of anxiety manifests in a psoriasis patient, cannabis can handle it.

Of course, not all cannabis chemovars are created equally. Thanks to a mixture of CBD, THC, terpene profiles and more, different strains of cannabis have different benefits. Consumers in finding the right strains for anxiety and depression should do research before plopping down on the couch and consuming cannabis.

Too much THC can actually increase anxiety and defeat the purpose.

Most flare ups of psoriasis are brought on because of stress — so managing it effectively can help stop psoriasis before it starts.

Psoriasis is a terrible disorder. It can cause unsightliness, pain, itching, and mental health struggles — even when it’s “not so bad.”

More than 125 million people across the world suffer from psoriasis. That’s about 2.5 percent of the global population. An estimated 8 million people in the United States have psoriasis, as do 1 million Canadians.

It’s a problem that interferes with everyday life — and can develop in anyone at any time, although most cases manifest between the ages of fifteen and twenty-five. The disorder can range from mild (where skin problems cover less than three percent of the body) to moderate (three to ten percent) and severe (upwards of ten percent). For reference, one hand has about one percent of the body’s skin, so even three percent can be a lot.

Nearly one quarter of all sufferers have moderate to severe cases.

The disorder is not a small problem, and cannabis can help in a big way. While relief can be found in full-spectrum cannabis, many benefits are obtainable in CBD-only products, which means that many more people in North America can access them.

While there is no cure for psoriasis, cannabis can give people hope of a simple, natural way to treat, prevent, and live with psoriasis.

Cannabis Patches: Do They Really Work?