Is purple weed really extra potent? Does it give the best sleep? How do I grow my own purple weed? Is it real?

Purple weed is very much real, but be wary of bright purple buds. These will be chemically treated and not real. Anthocyanin is the chemical responsible for the purple in weed. These are water-soluble pigments common to much of the plant kingdom. The “cyan” in “Anthocyanins” refers to the blue color, but these molecules can express a wide range of tones, including red, purple, dark blue, and even black. The actual color that renders from anthocyanins is dependent on the pH of the soil the cannabis grows in.

Anthocyanins form a part of a class known as flavonoids—the compounds primarily responsible for the hue of plants. Anthocyanins form one of twenty known flavonoids present in cannabis, out of the 6,000 present in the wider plant kingdom. Flavonoids are what cause plants to shift their color spectrum when the days get shorter and the weather starts to cool.

While many of us look in wonder and admiration at the range of hues produced by nature, there’s always an evolutionary benefit behind it. When plants turn purple, it’s typically to enhance chances of pollination. Pollinating species, like bees and butterflies, are attracted to the color purple. It’s why you often see purple stripes in flowers that lead toward the center, where pollen will be found.

The degree to which a cannabis plant produces purple tones is dependent on its genetics. Certain chemovars have a genetic predisposition to higher levels of anthocyanins, and those without that genetic proclivity can’t produce those purple tones no matter how a breeder tries to induce them. 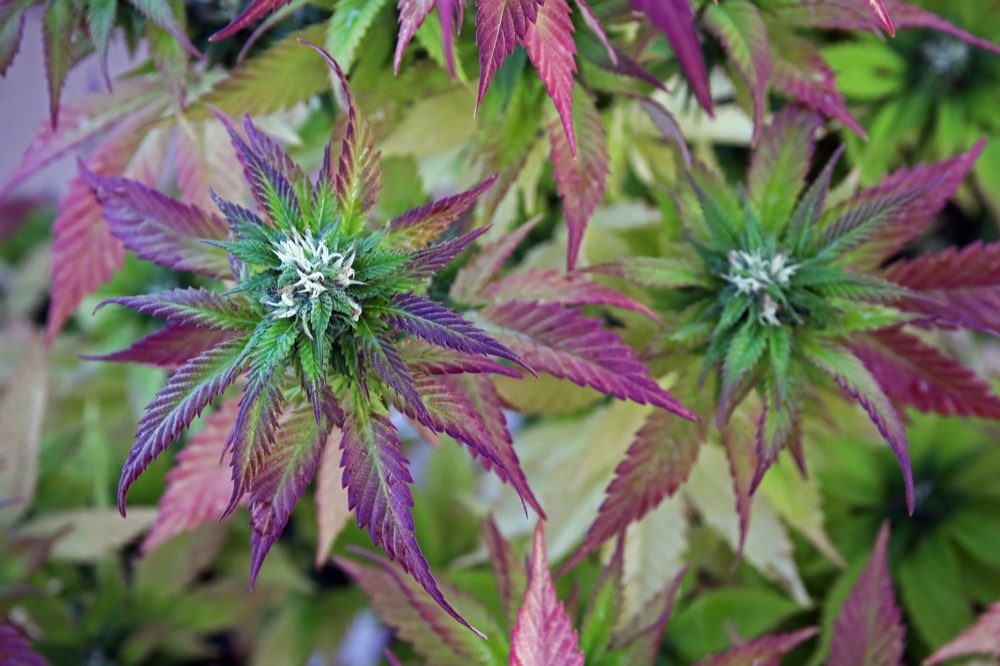 Are There Medicinal Benefits to Purple Weed?

RELATED  Hashishene: The Terpene Only Found In Hash

That said, anthocyanin, like many other flavonoids, is an excellent source of antioxidants and is commonly found in foods like blueberries, raspberries, and grapes. In sufficient quantities, antioxidants can produce anti-inflammatory effects in the body. This means that if eaten, purple weed may exhibit beneficial effects on inflammatory conditions, such as fibromyalgia and arthritis.

With regard to cannabinoid content, many chemovars that exhibit purple hues are generally lower in THC than the more standard green buds.

Will Purple Weed Help me Sleep?

The short answer is: Not anymore than other chemovars of similar cannabinoid concentration. With the purple hue in cannabis due to anthocyanins, the color has little to do with the end effects that many consumers experience.

While some purple chemovars are widely known for the ability to sedate, this is not due to color. One prime example is that of the well-known chemovar, Granddaddy Purple. Widely regarded for its ability to place consumers in a relaxed, stress-free, sleepy state, it’s actually the profile of other compounds within that help it modulate these effects. High quantities of the sedating terpene myrcene, coupled with the abundant presence of the stress-relieving caryophyllene that synergize with the major cannabinoids, are what helped Granddaddy Purple attain such a high status. 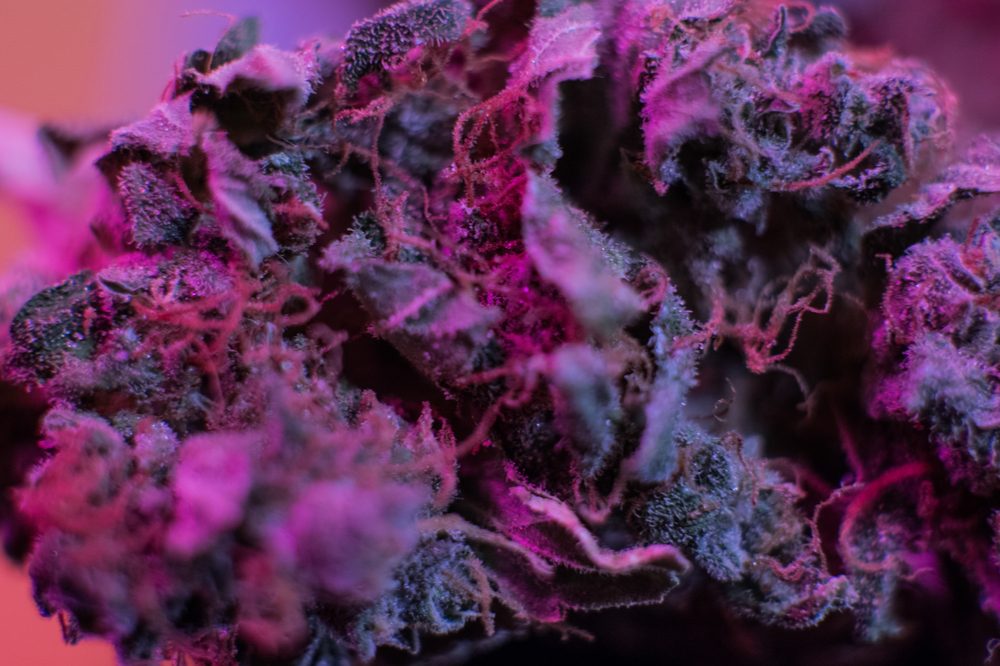 There are several chemovars that produce beautiful purple buds without sedating effects.

Tropical Cookies is a cross of GSC and Tangie. It is known to produce a happy and uplifting effect that often induces a high-energy, creative buzz with mild euphoria that banishes any trace of couchlock.

Purple Haze, as its name suggests, also falls into this category. The chemovar made famous by Jimmy Hendrix envokes energizing and uplifting effects that are long-lasting. Among medicinal consumers, this one is a common go-to in the treatment of mood disorders like depression and anxiety.

How To Grow Purple Weed

The two critical factors involved in growing purple weed are the genetics and control of the environmental conditions in the grow space.

In order to produce purple weed, the underlying genetics must first be present within the seed. When selecting seeds, popular purple chemovars include Purple Haze, Sour Grape, Candyland, Granddaddy Purple, and Purple Skunk.

To do this, reduce the temperature to below fifty degrees Fahrenheit during the nighttime cycle throughout flowering. This will help break down the chlorophyll and allow for the anthocyanin to become more active. By doing this consistently in the weeks before harvest, growers can maximize the underlying genetic potential for purple buds.

Is There Medicine in Color

When consuming cannabis, it’s always best to consume the chemovar that offers most appeal. Even though the purple hue in cannabis doesn’t carry any significant benefit in terms of its medicinal properties, don’t underestimate being around flowers that exhibit other color spectrums. If it makes you feel connected to the plant, curious, and intrigued, then that’s medicine too!

Is Weed a Depressant?