Second hand vape smoke may contain particles that are carcinogenic and toxic.

Vaping has taken the smoking community by storm, for both nicotine and cannabis enthusiasts. Vape pens are modern, sleek, and convenient while offering a safer alternative by reducing exposure to combusted material. There is, however, some concern over second-hand vape smoke. Do cannabis consumers need to worry?

Vape pens are marketed as the healthier alternative to traditional smoking – even as a tool to help quit smoking nicotine. These are easier on the lungs and come in a myriad of pleasant flavors, like cherry and coconut. The idea is that reduced combustion reduces the carcinogenic risks. Let’s look at the truth of this statement.

Dangers of Inhaling From a Vape Pen

Even if it is less harsh on the body than traditional smoking, vaping may still be harmful to your health. By now, most know that nicotine is a highly addictive drug that puts you at risk of heart disease, no matter how you ingest it.  Cannabis, on the other hand, may lower blood pressure and help mitigate damage to heart tissue during a heart attack. Good, right?

Well, here’s the rub: vape cartridges may contain harmful heavy metals and carcinogens. Some of the known toxic chemicals in the liquid are diacetyl, acetoin, and pentanedione, which can lead to lung disease. Some of these chemicals have even been connected to popcorn lung, a rare condition that scars and narrows the bronchioles.

Other contaminants may additionally enter cannabis cartridges through the production process or by deliberate inclusion (thinning agents, preservatives, and flavoring). 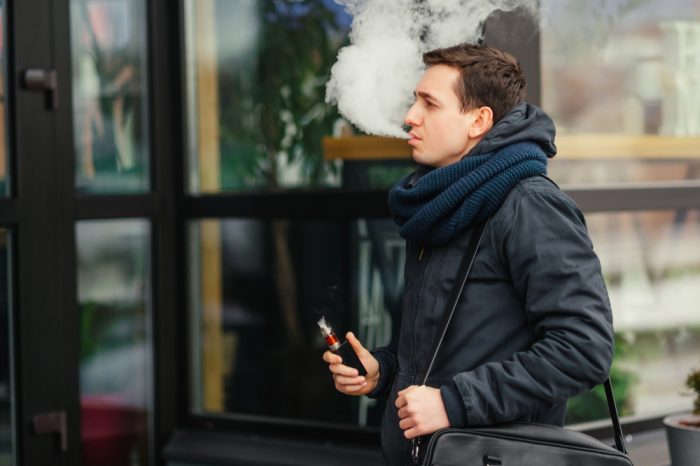 Smoking a joint is harsher on the lungs; the burning produces harmful compounds, like tar. Second hand smoke from a joint can be almost as damaging as that from cigarettes. It contains some of the same cancer-causing molecules.  Most of these are products of incomplete combustion, which is unavoidable when burning any organic matter. These toxic molecules are a risk factor for asthmatics and others.

Although vaping doesn’t produce a thick cloud of smelly smoke, it has its own form of toxic second hand ‘smoke’. Studies have shown that second hand smoke from vape pens worsens the air quality, causing eye/throat/lung irritations, and increases the risk of respiratory problems. Toxic particles spread through the air and are absorbed via inhalation, oral ingestion (through dust), or skin absorption.

Vaping May Increase The ‘High’

But, while vaping eliminates the production of some harmful compounds associated with smoking,  it can also result in stronger effects from THC. This can be good or bad, depending on your needs. Since vaping doesn’t result in combustion, many of the terpenes and cannabinoids are preserved. Some studies have found that it’s the terpenes that largely influence the difference in “high” from method to method. This is accomplished through the Entourage Effect. It’s an interesting problem, one that you will have to experiment through.

RELATED  Is It Unethical To Secretly Give Medibles? The Law Thinks So 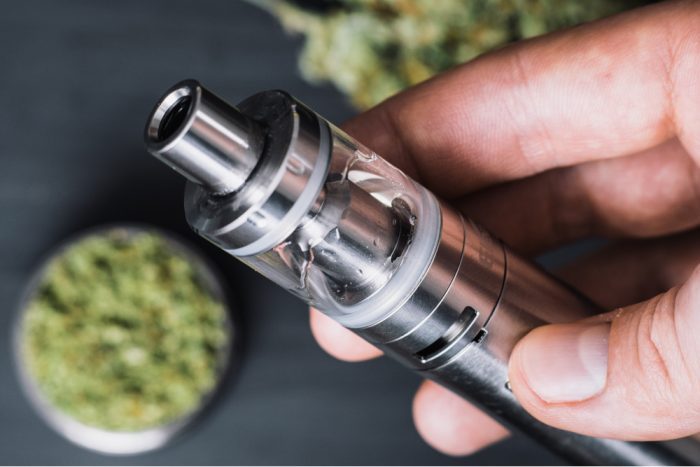 It’s true that vape pens and e-cigarettes contain less toxic chemicals than a traditional cigarette, but that doesn’t mean that they’re healthy.

A regular cigarette boasts 7000 different chemicals, many of which are considered toxic. An e-cigarette contains less of those toxic compounds. However, they tend to have a higher concentration of nicotine than a single cigarette.

One liquid cartridge can contain as much nicotine as an entire pack of cigarettes. In other words, vaping is just as addictive as regular smoking. Sadly, that blows out of the water the idea that vaping can help smokers quit. Instead it simply offers a replacement addiction. (Fortunately cannabis can help – more info on that here.) A 2014 report indicated that smokers who started vaping in efforts to try to quit smoking have not been proven to be able to quit, despite marketing claims by e-cig companies.

Lack of Regulations Lead to Misconceptions

There aren’t a lot of regulations in place when it comes to vaping. It generally appears to be more socially acceptable. Even minors can buy e-cigs online. Social cues and regulations like these lead people to believe that vaping isn’t bad, especially since there aren’t any obvious, immediate negative effects. Yet since vaping is still relatively new, long-term effects are unclear.

It’s time for us to consider all of the health effects of these aerosolized particles. Both nicotine and cannabis vape cartridges release them with every puff. More studies will demonstrate which molecules are present in vape smoke, and then which of these are dangerous to our health.