Poppers are a mix of cannabis and tobacco taken through a bong.

Doing poppers (a method of combining cannabis and tobacco to smoke not alkyl nitrites) is popular as a way to increase the high of cannabis. And unsurprisingly, it has become a cause for concern, according to new research from the journal Psychology of Addictive Behaviors (2019).

The study seeks to explain how taking tobacco and cannabis during adolescence influences young lives and health outcomes. Researchers surveyed nearly 2,500 kids from California about their tobacco and cannabis habits, including whether they consumed these together, separately, or one right after another. Amazingly, consumption methods have a significant correlation in poor mental and physical health.  Adolescents smoking cigarettes and cannabis have a higher frequency of “troubling” behaviors. These may include fighting, skipping school, getting fired, and having run-ins with the police.

Poppers are, typically, sequential hits of cannabis then tobacco, and taken via a bong. Users load the first bowl with cannabis then quickly follow that with loose cigarette tobacco.

Interestingly, there’s a large cross-over between young people who consume cannabis and those who use tobacco. For many years, experts suspected that smoking cigarettes led to smoking cannabis (which would help explain the popularity of poppers). However, more recent research contends that cannabis consumption might lead to tobacco consumption (or happen simultaneously) as thrill-seeking youth look to edge up their high by adding nicotine into the mix.  This leads to nicotine addiction and increased health risks.

vTobacco-using teens are already more likely to suffer from anxiety and panic attacks than those who abstain. Unfortunately, exposure to nicotine and free radicals, from combustion, can alter how the brain behaves and develops. For teens whose brains are still growing, tobacco is a valid threat to their long-term health and happiness.

So, if cannabis can change how tobacco affects the brain, it’s probably a good idea to avoid mixing the two. The 2019 study in Psychology of Addictive Behaviors noted that the troubling behaviors and poor health outcomes only occurred in teens who combined, or sequentially consumed, tobacco and cannabis. While a number of those surveyed admitted to doing both, the teens who separated consumption had much lower levels of negative effects.

There is another kind of popper, a liquid drug that gives an instant high when inhaled. It has nothing to do with cannabis and may sometimes go by the name of butyl nitrite, room deodorizer, or liquid gold. Used recreationally, these chemicals give an instantly raised heart rate and warm sensation. The euphoria that follows, however, wears off in a few seconds.

The most popular inhalant is amyl nitrite. The name originates from the 1960s. The drug was sold as capsule that had to be popped to release. Amyl nitrite is a common heart medication. It can also treat cyanide poisoning.

What do poppers do? This is a dangerous drug that can elevate the heart rate to fatal levels or lead to deadly complications. One example is methemoglobinemia, a life-threatening situation that follows when the body creates too much methemoglobin in red blood cells.

Cannabis vs. Cigarettes — Is There a Risk Difference?

Of course, poppers or not, the debate always comes down to which is the “worse” substance to smoke: cannabis or tobacco. For the record, it’s clearly tobacco. Consumers often smoke cannabis straight, without added chemicals or flavorings. Tobacco, on the other hand, is processed with more 7,000 chemicals — including known carcinogens.

While smoking anything is damaging to the lungs, the extra layers of crud that are included in mainstream tobacco products are far worse for your health than the terpenes and cannabinoids found in good ol’ weed. It’s also true that cannabis smokers actually pull less smoke into their lungs, so they’re exposing their organs to fewer irritants. And, of course, there are other ways to consume cannabis. You can lower the risk of lung problems by vaporizing dry bud.

Let’s also not forget that nicotine is highly addictive. People who use it regularly become full-blown addicts and go through severe withdrawals when they quit smoking. 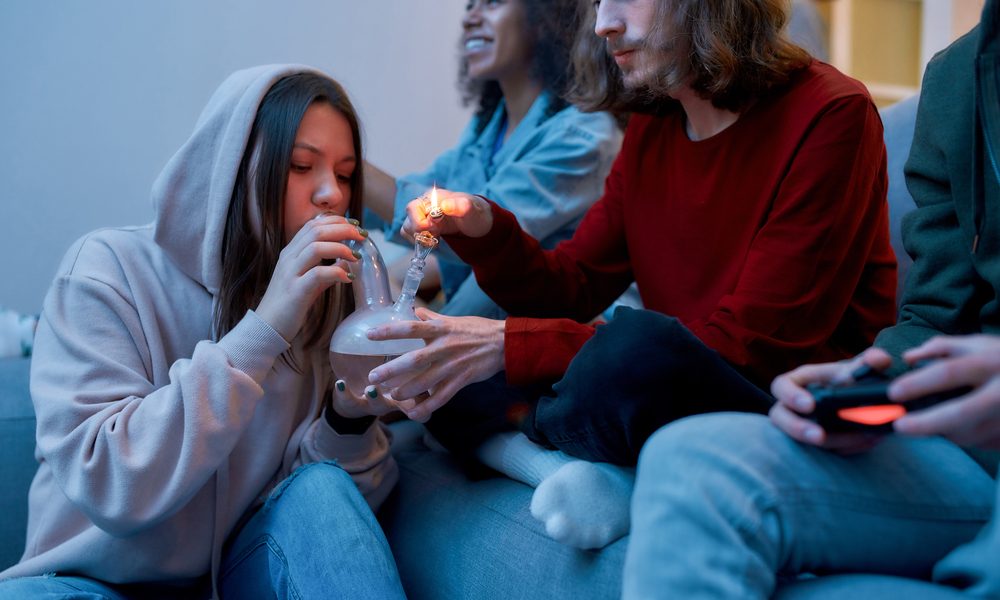 Quitting Poppers — And Other Things

If you’re worried about the ill effects of smoking tobacco concurrently with your cannabis, why not quit tobacco altogether? And if you can’t quit completely, at least change your schedule so that you’re not combining the two.

But, before you decide how to quit, prepare for success. Recent research out of the Medical University of South Carolina suggests that quitting strategies for people who do poppers or spliffs needs to be different than those who use tobacco on its own. It all depends on how interrelated the two activities are for you personally. Monitor your own habits.