Tell Us How You Talk To Your Kid About Cannabis

How do you talk to your kids about cannabis? They should be ready for a cannabis-positive future.

There’s a cannabis stigma in our culture, especially when it comes to kids. While no one bats an eye when a father cracks open a beer in front of his 8-year-old, or a mother pours herself a glass of wine, sparking a joint in front of a child is still a major taboo. But because kids aren’t stupid, they’re still going to learn about cannabis in some way, even if they don’t see it firsthand. So it’s a good idea to have a plan on how to talk to your kids about cannabis.

Today’s parents are likely the victims of failed anti-drug policies of yesteryear, such as Nancy Reagan’s “Just Say No” campaign or the D.A.R.E.’s happy anti-cannabis sing-a-longs. Not only did those campaigns not work, they were filled with misinformation about cannabis. Not only did they leave kids unsure how to talk about cannabis, they filled them with misinformation.

Today’s parents know that the last thing you should do is lie to your child. Instead, it’s more effective to have fact-based discussions and to talk with them in constructive, non-judgmental ways. Lying to child about a topic will breed mistrust and make them less likely to seek you out in the future when further questions arise. But, by sticking to the truth and meeting your child where they are, you can have healthy, nuanced conversations with your children about the legalities and medicinal values of weed, that aren’t centered around the cannabis stigma. 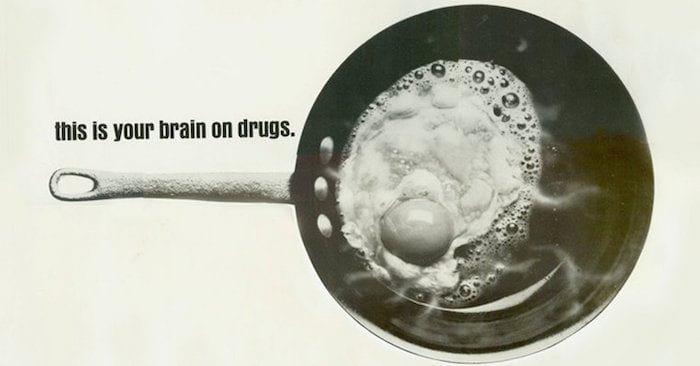 Via The New York Times; “This is Your Brain on Drugs” ads scare-mongered with false information about cannabis.

Step One in How To Talk To Your Kids About Cannabis: Listen

Today’s kids are growing up during a cannabis revolution. A once-illegal substance is slowly becoming legal all across the country, in both small and large steps. Because these sorts of issues are omnipresent in public discourse, kids will naturally know that something is going on. And they’ll probably have questions.

Of course any parent wants their child to feel comfortable talking to them about issues like this. Even many adults today have a hard time understanding cannabis policy, so it’s natural that your kids might struggle as well. Questions of “Why was it illegal?” and “Why do some people want to make it OK?” are perfectly normal questions. But you also need to be prepared to answer these. We’ll get to those answers in a minute.

It’s also essential to keep in mind a larger truth. Most Americans have tried cannabis at some point in their lives. Chances are, your children will too. Therefore, you want to keep both short- and long-range goals in mind. You’re not just going to talk to your kid about cannabis now. You’re preparing a foundation for their understanding of cannabis in the future – when they’ll likely decide when and how to experiment with it.

There may no greater way of ensuring that your child disregards your advice than to lecture them – and this is about any topic. So it’s important to listen as much as you talk, and help your child reason through this situation.

Also, remember that most Americans today believe that cannabis should be legal in some aspect. You wouldn’t expect the number to be quite so high (over 60 percent) because the cannabis stigma still feels pervasive. But it’s true. So don’t worry about being the only pro-pot parent on the block. Chances are, your neighbors hold similar views.

Telling your children about the benefits of cannabis is easy. It’s a great medicine. But it’s also a substance that should be restricted to adults, except in instances of disease or chronic conditions. There’s always a temptation to liken cannabis to alcohol, but a better metaphor may be Tylenol. Just as there’s a Kids’ Tylenol and an adult version, cannabis is also a medicine that works better for adults.

You can also explain that for many years, people didn’t understand cannabis and thought it was bad. For smaller kids, that’s probably all you need. But having a conversation with tweens means getting more real. You can talk about the association of cannabis with non-Americans, and how sometimes prejudice and racism (which led to the name “marijuana”) distort public perception. But now we’ve studied cannabis and we know that it can help epileptic patients, calm people down, and help fight cancer. Racist views are also (sadly, slowly) lessening.

Once the kids get a little older, however, it’s time to get real about recreational cannabis. They’ll likely ask The Big One: “Have YOU ever tried it?” And it’s important to be honest. Recreational consumption has large benefits beyond pleasure, but it can also hamper the development of young brains. 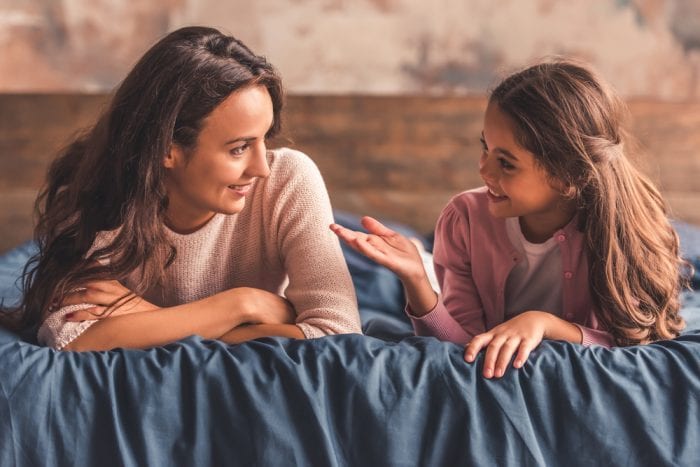 If your child knows you consume cannabis or have in the past, they may feel odd. Older children today have already experienced the cannabis stigma firsthand, and may associate weed with “drugs.” It’s your job to lessen the cannabis stigma,  while also acknowledging that it exists.

Parents can prepare to have these conversations with their children by writing down their answers or talking with each other in a role-play scenario. Just be careful, because while you want to have answers, you don’t want to veer into lecture mode. Again, when you talk to your kids about cannabis, listening is key.

If you stay honest, listen, and respond to their questions in a non-judgmental way, you will give your offspring the best chance to make responsible decisions about cannabis in the future.