Cannabis research is slowly proving what anecdotal wisdom has been preaching for decades.

The findings of cannabisresearch 2018 move us further along toward a better understanding of the benefits, risks, and contraindications associated with cannabis medicine. This will, in turn, help develop better therapeutic applications and finally provide appropriate dosing information.

ONE: A Gut Protein Exports Endocannabinoids That Prevent Inflammation

For the first time, researchers believe they have uncovered the details of how people with inflammatory bowel disease (IBD) find relief with medical cannabis. Although this study did not intend to explore cannabis for IBD directly, it did discover a secondary mechanism of action within the gut, which is endocannabinoid based.

One important action of digestion is an immune response that targets unwanted pathogens that make their way into the digestive tract with your meal. The study linked above unveiled a secondary digestive action, involving the endocannabinoid system. The result is that the inflammatory immune response turns itself off when the body doesn’t need it. As phytocannabinoids mimic the action of endocannabinoids, this represents a novel new area of cannabis study to help people who suffer from Crohn’s and ulcerative colitis.

TWO: CBD For The Prevention of Addiction Relapse: Preclinical Proof of Principle

Cannabidiol (CBD) is an exciting new concept in addiction research. For this most recent study, researchers applied alcohol and cocaine-addicted rats with a transdermal application of CBD. Patients receive Medicine once per day for a week. Following the CBD treatment, the addicted rats had reduced drug-seeking behavior, reduced anxiety. Importantly, CBD did not trigger tolerance development or sedation. What is perhaps most astonishing, is that these benefits lasted for a full five months after the short week-long dose application!

Proof of Principle studies are an important link between Phase 1 and dose-ranging phase II studies. This designation “proof of principle/proof of concept” designation indicates that a compound has shown positive potential in animals and has passed early safety testing.

This is yet another study demonstrating that access to legal cannabis reduces opioid abuse. This study digs deep into Medicaid statistics, and concludes: “State‐wide medical cannabis legalization appears to have been associated with reductions in both prescriptions and dosages of Schedule III (but not Schedule II) opioids received by Medicaid enrollees in the United States.”

FOUR: Cannabis Can Reduce Opioid Use By Boosting Its Painkilling Effects

Columbia University has found that cannabis can work synergistically with opioids via the CB1 receptor. Cannabis can boost the painkilling effects of opioids, which means lower doses of this dangerous pharmaceutical and, consequently, reduced risk of addiction.

In early 2018, researchers gave participants different doses of cannabis, oxycodone, or some combination of the two. These subjects were then subjected to the Cold-Pressor Test (holding their hands in a bucket of cold water).  It is a double-blind, placebo-controlled, and first of its kind, study that determined cannabis improved the pain alleviation of oxycodone. Although the optimal dose of oxycodone by itself was 5 mg, this dose could be halved if participants were also given cannabis at the same time.

FIVE: Cannabis is Safe for Seniors

A survey found that the average senior is taking at least ten different pharmaceuticals every day. And many of these are merely to treat the side effects of the prescription that came before.

An Israeli study of 900 elders tracked cannabis treatment for six months. Of the group, seventy five percent had never tried cannabis medicine, but at the end of the study, ninety three percent reported improved symptom relief. Those who sought relief from chronic pain reported that the level dropped from an eight to a four (on a scale of ten).

No wonder those over 65 represent the fastest growing cannabis-consuming demographic. 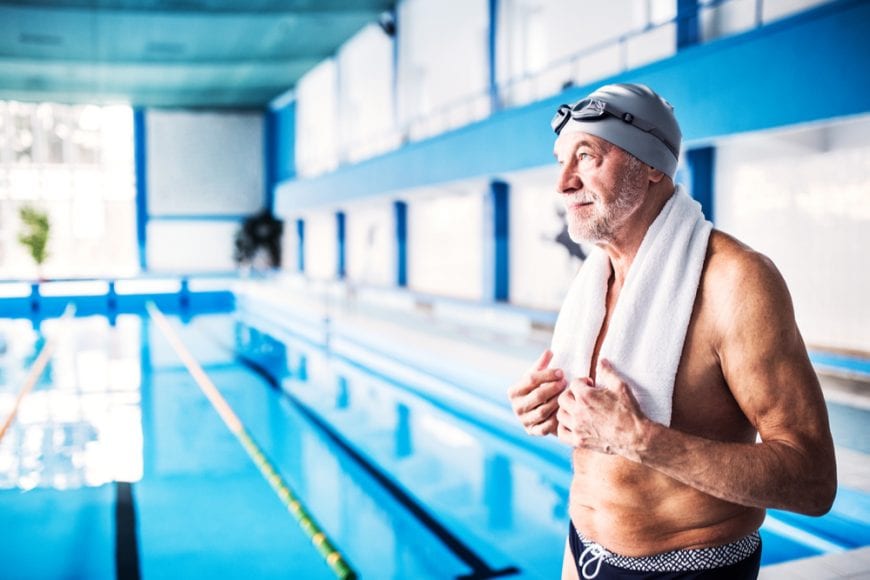 A new study out of Brazil looks at the potential of cannabidiol (CBD) as a treatment for depression. Rats received either an injection of CBD or a saline solution, then subjected to ‘the swimming test’. This test has long been used in the study of depression. When researchers place this particular breed of lab rat into a forced swim test, they tend to ‘give up’ and float instead of actively swimming.

RELATED  Fibromyalgia Pain Sent Me Into A Spiral Of Addiction

The fascinating thing about this study is that rats injected with CBD before the swim test swam for much longer than the placebo group. Instead of instantly floating, or giving up, they kept swimming, indicating the CBD gave them more drive and more gumption to keep fighting. This antidepressant-like effect lasted for a full seven days after the initial injection.

The researchers of this study concluded, “that CBD induces fast and sustained antidepressant-like effect in distinct animal models relevant for depression.”

A cannabis research study out of the University of Sydney and Macquarie University is the first of its kind, as it looks specifically at the success of CBD in treating methamphetamine addiction (meth). This is a highly addictive street drug that appears as a white powder or crystals. Users smoke, inject, swallow, or snort meth. This stimulant makes the user hyper focussed, attentive, and alert while heightening pleasure.

This novel study found that cannabidoil (CBD), delivered at a dosage rate of 80mg per kg of body weight, reduced drug-seeking behavior in rats. It also found that cannabis reduces the likelihood of relapse via mechanisms we don’t yet understand.

EIGHT: CBD Can Could Potentially Pair With Chemo Drugs

There are little vesicles that prostate cancer cells make, called exosomes. These are small enclosed spheres that are released from the parent cell and carry various molecules to the recipient cell, regulating both physiological and pathophysiological mechanisms, including cell migration, differentiation and angiogenesis observed in cancer cells.

It’s like the head office cancer cell sending out a little starter kit to the next store in the franchise. And with that kit, it remodels the building and sets up pipelines to go to the next franchise.

In addition, research suggests that EMV shedding from cancer cells can help to shuttle chemotherapeutic drugs out of the cancer cell, thus aiding in resistance to chemotherapy. This in turn results in cancer cell survival, suggesting that inhibition of EMV release could be one therapeutic strategy to make the cells more susceptible to apoptosis.

RELATED  Should Cannabis be the First Try for Fibromyalgia Treatment?

One study investigated the ability of CBD to do just that.

A 2017 CDC survey of 28,176 women and 22,943 men, in America, sought to find out if cannabis consumers were having more sex than the rest of the population. This comprehensive survey is often the go-to for researchers looking to justify further analysis into their own (related) topic.

Dr. Michael L. Eisenburg and Dr. Andrew J. Sun, from Stanford University, looked into the cannabis research on the effects of cannabis on male sexual and reproductive function. They found that “Marijuana use is independently associated with increased sexual frequency and does not appear to impair sexual function.” To be specific, male cannabis consumers have twenty percent more sex than their non-consuming counterparts.

TEN: Where THC Goes In The Brain to Kill Pain

Publication: October 2018, Neurology
Recent neuroimaging determined that THC was able to reduce pain in healthy participants. And this has links with the brain region called the anterior cingulate cortex (ACC).

This section of the brain holds many CB1 receptors, which THC activates in turn. The study used a single dose of THC vs placebo for chronic pain. Doctors evaluated using a subjective pain rating scale and resting brain state of the ACC. A fMRI (functional MRI) machine measured changes in blood flow throughout the brain.

There were seventeen patients participating in the study, with an average age of the 33. The patients had chronic lower limp radicular neuropathic pain that centers around spine and legs. The subjects had to have experienced the condition for at least six months in order to participate in the study.

Cannabis research is on the rise and 2019 should being even more progress and revelation! We can’t wait!