A THC inhaler for asthma may be suitable for most patients. Problem is, it’s not widely available.

Asthma prevalence has increased over the past two decades and it is estimated that, in developed countries, approximately ten percent of the population lives with asthma. Asthma is a chronic inflammatory condition of the airways. As such, steroidal medications are the typical treatment. Long term use of corticosteroids is not ideal, and especially in the pediatric populations.  The development of a new line of anti-asthmatic medicines that are non-steroidal would mitigate this problem.

Previously published reports have provided evidence for the benefit of cannabis in the treatment of asthma. The studies that followed these reports showed that cannabinoids have a bronchodilatory effect in asthmatic patients when administered in form of an aerosol (like an inhaler) or via ingestion. In fact, one of the earliest studies conducted, in the late 1970s in asthma patients, used aerosolized THC in three different doses: 50, 100 and 200 micrograms. They evaluated the effectiveness of THC doses by measuring lung function, using parameters that described how effective the lungs were in inhaling fresh air and exhaling carbon dioxide-rich air.

Healthy airway left and asthmatic to the right

Will Lung Function Improve with THC Inhaler for Asthma?

Researchers in this 1970s study observed, with all three doses, that lung function improved, and that the effect reached its peak at around sixty minutes post-administration and lasted for three hours. The researchers argue that the most effective dose is 100 micrograms in two doses of 50 micrograms each. This dose leads to significant improvement in lung function compared to placebo without any absorption into the blood nor cardiovascular side effects. This report showed unequivocally that indeed, THC is a potent bronchodilator with lasting effects that rival those of corticosteroids.

Since there was no absorption of THC from the lungs, one may argue that THC in an aerosolized form may be safe to use in pediatric populations, and potentially preferred over corticosteroids, given the adverse physiological side effects observed with steroidal medications in children and adolescents. Studies indicate that THC appears only transiently in the bloodstream and undetectable by radioimmunoassay at the fifteen minute mark.

Aside from the direct effect of THC on bronchial function, cannabinoids also may exert anti-inflammatory properties. Since asthma is an inflammatory condition, it would be expected that this aspect of disease pathology would also be mitigated with THC. This is important, since having the alleviation of one aspect of the disease (i.e. bronchodilation) without the other (i.e. inflammation) would only act as a ‘band-aid’ and would not fully correct the disease pathophysiology. Since THC can attack at both fronts, its anti-asthmatic potential is great. So could a THC inhaler for asthma be a real competitor with corticosteroids? 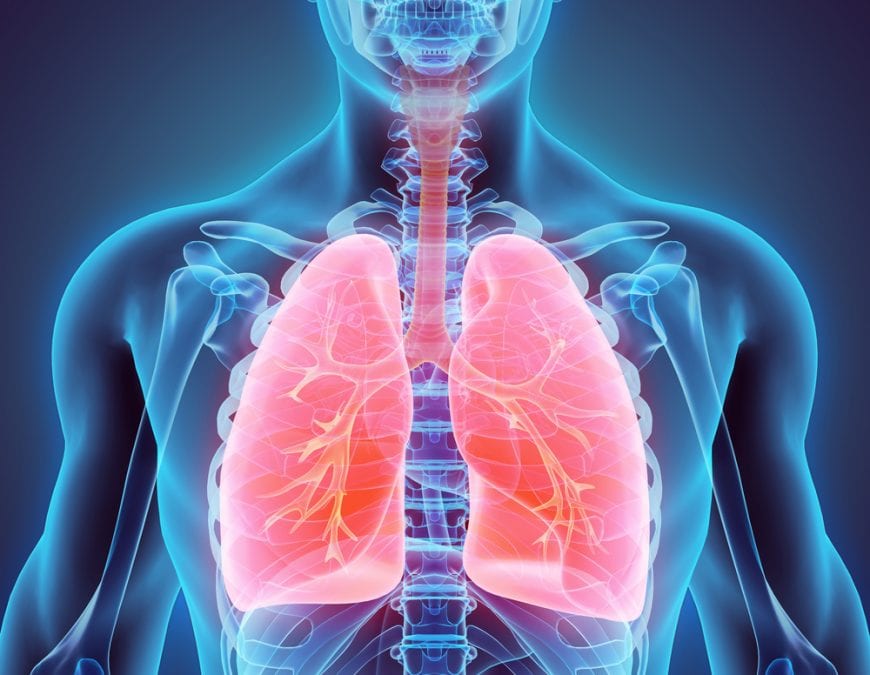 What About Other Lung Diseases?

One important question arises from the above argument, and it deals with other lung diseases. If THC has such therapeutic potential for asthma, what about other devastating lung diseases? One such example is cystic fibrosis, which is one of the most prevalent lethal autosomal recessive disorders. It occurs due to a mutation of a particular gene, called CFTR. How can THC mitigate this genetic defect? To answer this question, the aspects of lung and whole-body physiology affected by cystic fibrosis need to be discussed. Firstly, pulmonary dysfunction is one of the primary causes of morbidity and mortality, and as observed for asthma, THC acts a s a bronchodilator and an anti-cough agent, thus improving lung function.

Secondly, loss of appetite and malnutrition are additional aspects of cystic fibrosis leading to morbidity and mortality. THC has been shown to improve appetite and CB1 receptor activation has been used to combat weight loss and anorexia in cancer and AIDS patients. Thirdly, the inflammatory aspect of cystic fibrosis is the very mechanism by which lung tissue destruction occurs. Anti-inflammatory properties of THC  therefore prevents the loss of lung tissue, further supporting proper lung function. So a THC inhaler for asthma and cystic fibrosis could help with these conditions. However, always consult a medical professional first prior to purchase.

RELATED  Is it THC or CBD That Brings The Sandman?

THC has a multi-pronged effectiveness on various aspects of lung diseases, such as asthma and cystic fibrosis. Therefore it could be a valuable candidate as a therapeutic strategy. The method of delivery would ideally be a smoke-free inhalant or inhaler. In appropriate doses (100 micrograms) an inhaler acts locally in the lungs. This regimen still needs testing in large-scale controlled clinical trials, for both the adult and pediatric populations. Consequently, since no side effects have presented, it appears promising.

Pre-Clinical Study on Cannabis for Cognitive Symptoms of Down Syndrome