Research Suggests Cannabis Could Cool You When You’re Too Hot

Will cannabis fight off hot flashes and heat waves?

Is there anything worse than being too hot? The sleepless nights, restlessness, and night sweats make it almost unbearable. But, forget the fans, icepacks, and desperate searches for air conditioning. The solution may lie in cannabis.

A recent study has found that cannabis may potentially manage night sweats. Cancer patients, for instance, often suffer from night sweats. These drastically affect their ability to sleep and their quality of life. There are often few treatment options, especially for palliative patients.

Night sweats are also closely associated with anorexia-cachexia syndrome, common among cancer and HIV patients. Because of this, it is thought that night sweats occur through the activation and production of pro-inflammatory cytokines, including tumor necrosis factor-? (TNF-?), interleukin-1, interleukin-2, and prostaglandins. The study looked at the impact that cannabinoids may have on body temperature. 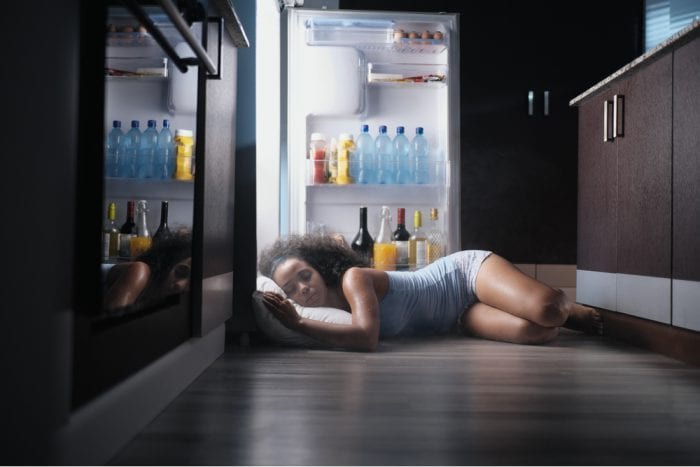 Cannabinoids have been shown to “modulate cytokine activity and produce hypothermia in animal models,” which suggests that these may hold therapeutic potential as a treatment for night sweats. As such, the study examined the effect that Dronabinol, an oral synthetic THC cannabinoid, had on night sweats in five cancer patients. The results showed that all five patients reported an improvement in their night sweats and that the synthetic cannabinoid successfully relieved their symptoms.

Another study looked at the effect that the synthetic THC cannabinoid drug, Nabilone, has on night sweats in cancer patients. With Nabilone given to four advanced stage cancer patients, the researchers found that the synthetic cannabinoid also resulted in successful management of night sweats. The patients all reported a significant reduction in symptoms within 48 hours of treatment with Nabilone.

But, what about a natural cannabinoid? Would these compounds have the same effect on body temperature regulation? The research suggests that they do.

Research tells us that THC is able to induce a homeostatic cooling effect, similar to what happens during hypothermia. One study showed that when CBD was given to rats alongside THC, CBD did not reverse the hypothermic effects of THC. In fact CBD may have exacerbated these effects. This means that simply taking cannabis may also be an effective measure against overheating and night sweats, as CBD does not affect or negate THC’s cooling properties.

If you’re feeling too hot, one of the common causes for that may actually be inflammation. Inflammation is the result of an immune response that increases blood flow to the damaged or compromised site. This is why when you’re sick, you often get a fever. It’s your body’s way of fighting infection and disease.

It is thought that one of the ways inflammation causes fever is through pro-inflammatory cytokines that bind to receptors on endothelial cells in the brain. These induce fever by initiating the production of prostaglandin E2, which is a hormone-like substance that plays an important role in inducing fever and inflammation.

Cannabis may be able to regulate body heat through the reduction of inflammation through its receptors. Cannabinoids, including THC, activate G-protein coupled receptors, known as CB2 receptors. These receptors may play an important role in inflammation modulating. CB2 are commonly found in immune cells, where these receptors influence the release of cytokines and the migration of neutrophils and macrophages. These are all essential components of an immune response that induces inflammation. A reduction in their release would result in reduced body temperature. 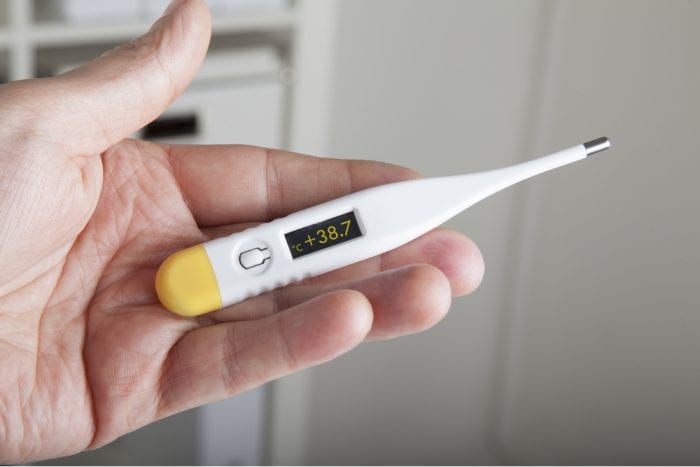 CBD may also be able to play a role in reducing body temperature. CBD acts on receptor pathways and other non-cannabidiol receptors. Researchers believe that CBD may target specific glycine receptors, which can result in reduced inflammation and temperature. This cannabinoid may enhance ? GlyR expression, a glycine receptor that mediates the glycinergic cannabinoid-induced suppression of inflammation.

So Can Cannabis Help When You’re Too Hot?

Overheating is an extremely uncomfortable experience that can affect sleep, mood, anxiety, and overall wellbeing. It is a common symptom for cancer sufferers, where it drastically affects their quality of life and palliative care. Research has shown us that synthetic THC cannabinoids may be able to treat night sweats in these patients. This is hopeful, as night sweats are a symptom that usually resists treatment.

Phytocannabiniods, THC and CBD, also hold promise. Researchers believe that THC induces hypothermia. Moreover, CBD may exaggerate these effects. Inflammation is one of the main causes of increased temperature and researchers think that cannabis may lower body temperature by modulating the cytokines, neutrophils, macrophages, and receptors involved in inflammation.