Study Says Smoking Cannabis is Not a Trigger for COPD

Chronic obstructive pulmonary disease (COPD) kills millions every year, but cannabis is not a trigger for COPD.

According to the World Health Organization, COPD kills one person every ten seconds. It is an umbrella term used to describe chronic lung diseases that limit airflow within the lungs. As research on cannabis and lung issues, like chronic obstructive pulmonary disease (COPD), continues to progress, scientists are finding that not all inhaled smoke triggers the lungs in the same way. Namely, inhaled cannabis smoke is not the same as cigarette smoke. The differences are noteworthy, particularly in regard to side effects and disease from long-term consumption.

It is well-known that tobacco use causes lung damage and respiratory conditions, such as COPD and lung cancer. In fact, both diseases are among the leading causes of death in the United States.

While cannabis smoke contains some carcinogenic components like cigarette smoke does, the two types of smoking are not even in the same ballpark. Cigarettes are much more toxic, with cancer-causing carcinogens that mutate DNA. Other research suggests that cannabis might actually help fight cancer. Now, studies are showing just how much cannabis differs from cigarettes.

Cannabis consumers can literally breathe a sigh of relief, because according to this scientific review in Breathe (2018), [1]Ribeiro, Luis, and Philip W. Ind. “Marijuana and the Lung: Hysteria or Cause for Concern?” Breathe.ersjournals.com, 2018, breathe.ersjournals.com/content/breathe/14/3/196.full.pdf cannabis does not act as a trigger for COPD. However, researchers don’t know why it doesn’t. A prevalent hypothesis is that the tendency for cannabis consumers to hold their breath when inhaling could be a potential reason, but whether or not that’s the case is unknown.

Cannabis has a bronchodilating effect, which could be another possible reason why it doesn’t trigger COPD. It’s also an anti-inflammatory. Studies have found that THC could potentially help relieve symptoms of COPD. By activating CB2 receptors, it could help reduce inflammation in the lungs.

In short, cannabis affects the lungs differently than tobacco. In a study published in the Journal of American Medical Association (2012), [2]Pletcher, Mark J. “Association Between Marijuana Exposure and Pulmonary Function Over 20 Years.” JAMA, American Medical Association, 11 Jan. 2012, … Continue reading over 5,000 men and women were studied over approximately ten years. The researchers found that over time, tobacco use reduces air flow rate and lung volume. However, the same was not true for cannabis. For cannabis consumers, air flow rate actually increased over time.

This is important information in studying the causes of COPD. Doctors diagnose the disease by measuring the ratio between air flow rate and lung volume. In the review published in Breathe, the authors did not find evidence that cannabis causes irreversible damage to the airways.

Regularly smoking cannabis can cause irritation to airways, potentially leading to chronic bronchitis. But the condition and its symptoms, like coughing, wheezing, and sputum production alleviate when the consumer quits smoking.

Scientists have warned against the effects of long-term heavy consumption, even though the effects are still largely unknown. Vaping could potentially remove some of the risks. But, scientists are unsure of the long-term consequences associated with vaping. What is clear in the vaping world is that dry herb vaporizers present a much reduced risk than the e-liquid vaporizers that are causing the vape crisis in the U.S..

One of the more obvious and stark differences between cannabis and cigarettes is that cannabis does not contain the same dangerous chemicals that cigarettes do. Chemicals like acetone, hydrogen cyanide, ammonia, tar and others cause cancer and serious respiratory diseases.

Typically, most cannabis consumers are only smoking cannabis flower. The compounds in that flower bind to receptors in a different way than nicotine. For instance, receptors that respond to nicotine can be found throughout the cells of the lungs and respiratory system. These receptors don’t respond to THC. 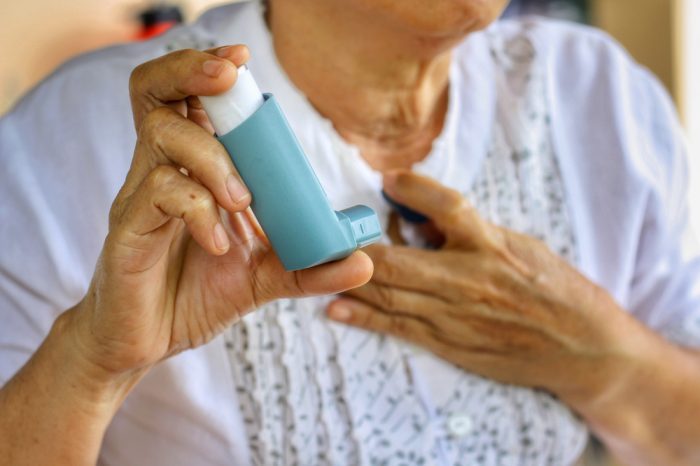 Another reason why cannabis doesn’t act as a trigger for COPD might be due to the smoking behavior of cannabis consumers. Scientists have noted that typically, cannabis consumers inhale less smoke on any given day than cigarette smokers.

Cigarette smokers often take up to twelve puffs from a single cigarette. Compare that with an average of six puffs from a bowl of cannabis flower. The exposure is much lower, hence a reduced risk. Each of those cigarette puffs include nicotine, a highly addictive ingredient. According to the National Institute on Drug Abuse, most cigarette smokers become addicted. Unfortunately, only six percent of smokers succeed in quitting in a given year.

The current statistics on cannabis addiction say that only nine percent of consumers become psychologically addictive. Unlike cigarettes, there are no serious symptoms of withdrawal. In fact, smoking cannabis can actually help cigarette consumers quit.

While the results of these studies are promising, there is a lot to discover in regard to cannabis and how it affects the airways. We still don’t know how vaping affects the lungs over a long period of time, or the real risks of heavy consumption.

New and different cannabis products are emerging on the market at a record pace and the scientific research has yet to catch up, which is concerning. But, this much we do know, cannabis smoke is not as harmful or deadly as cigarette smoke. It doesn’t cause COPD, and it’s not addictive like nicotine.