Does ‘Weed Tolerance’ Mean Fewer Side Effects for Patients?

Weed tolerance is complicated. While it helps mitigate many of the negative effects of THC, it also means that patients need more for the same results.

Like everything in life, there’s no such thing as a free lunch. Cannabis can be hugely beneficial to many patients battling chronic health conditions. But high consumption rates over time result in the formation of a natural tolerance to compounds like THC.

It doesn’t matter whether it’s testosterone or caffeine, giving the body too much of anything either shuts off our natural production or suppresses our natural sensitivity. An increased exogenous supply of anything will always shift internal processes in the body. But how does this work with cannabinoids, like THC?

How Do Patients Develop Weed Tolerance?

With repeated exposure to THC, the body begins to develop a tolerance. This occurs due to repeated activation of the CB1 and CB2 receptors. It triggers something known as desensitization, where the receptor demonstrates a weakened response to THC.

With repeated exposure, desensitization gives way to internalization, and it’s this which triggers actual tolerance. In such cases, the receptor disappears from the cell surface, and with continued repeated use, this process intensifies. But while it may seem catastrophic, the good news is that the body can replace the receptors should the supply of THC drop over time.

But tolerance is never quite that simple. And for medicinal cannabis patients, a weed tolerance has its benefits as well as its drawbacks.

Cognitive Functioning and the Benefits of a Weed Tolerance

For recreational users, weed tolerance is undoubtedly an inconvenience. But what about for medicinal patients?

Cognitive functioning refers to mental abilities such as learning, thinking, reasoning, remembering, problem-solving, decision-making, and attention. From a medicinal perspective, few can argue that a tolerance to impaired cognitive functioning is a bad thing. In fact, it’s the sluggish confusion that often ensues after THC consumption that very often turns many medicinal patients away from higher THC chemovars. But what the evidence suggests is an ideal scenario, where repeated use still treats symptoms but maintains baseline performance in learning, memory, and psychomotor ability.

Researchers also noted, “that frequent cannabis users have a more blunted response to the acute psychotomimetic effects of ∆9-THC compared to a group of healthy controls.” Psychotomimetic effects refer to the actions that mimic the symptoms of psychosis. They include delusion and delirium, something a tolerance seems to mitigate the risk of.

Researchers in the study also noted that in addition to cognitive function, evidence shows that regular cannabis consumers become tolerant of other behavioral and physiological effects. Decreases in resting heart rate, anxiety, and confusion are apparent in regular consumers over non-consumers.

Regular consumers also exhibited smaller fluctuations in EEG signals, cortisol release, and prolactin levels when compared to those without an existing tolerance. All of the above markers are characteristic of a healthier state – the kind that promotes true healing from within. 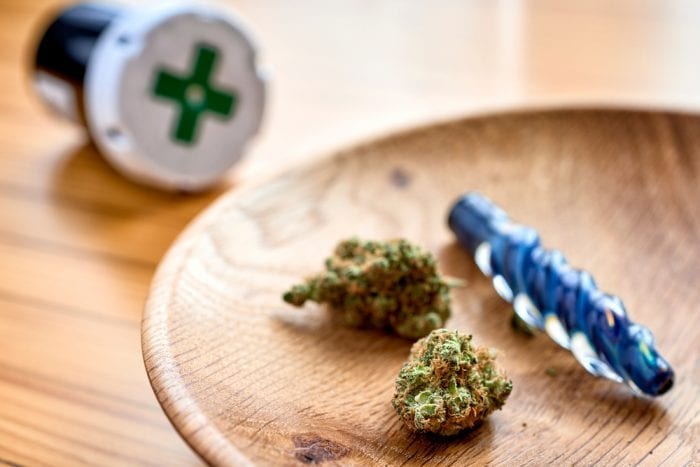 The Downsides of a Weed Tolerance

The principal downside of an excessively high tolerance is that patients require more medicine to modulate the same effects. This means increased costs, and even sometimes an increased frequency of administration, as the effects often fade sooner with a high tolerance.

For patients who medicate with high quantities of THC for issues like chronic pain and arthritis, a tolerance to THC is a very real issue. But in such situations, what can reliant patients do?

What if a One-month T-break is Too Long?

One month of abstinence may sound like an eternity for medical patients who rely on cannabis to treat symptoms. But abstinence for any length of time, if even for a few days, will still have beneficial consequences.

For those who can’t forego medicating due to underlying conditions, then microdosing can be an effective strategy. This involves consuming lesser amounts of cannabis more often. This method of honing the minimum effective dose will help enable patients to avoid the excessive stimulation of the CB1 and CB2 receptors that is responsible for tolerance build-up.

RELATED  How to Dab: The Only Guide You Need

Another strategy to keep tolerance under control is to introduce more CBD. This miracle cannabinoid doesn’t antagonize the CB1 or CB2 receptors directly; rather, it triggers TRPV1 receptors that then stimulate the CB1 and CB2 receptors. By experimenting with or cycling high-CBD, low-THC chemovars, medical patients can avoid rocketing their tolerance.

When it comes to dealing with or recognizing a tolerance, everyone is different. For some, the effects of a weed tolerance are beneficial, as they help mitigate the unwanted side effects of THC. For others, tolerance may be an issue that requires a reset of some sort. While for others still, it may even be a warning sign that it’s time to reevaluate their relationship with the plant.

The Latest Science on Bong Lung Has Consumers Worried