What Are Auto Flowering Seeds?

If you’re a novice grower looking for a foolproof way to grow cannabis, then autoflowering seeds may be for you.

So what are Autoflowering Seeds? With the clue in its name, autoflowering seeds flower automatically regardless of light cycles. They have a unique genetic adaptation that stems from a sub-species of cannabis known as Cannabis Ruderalis. The term ruderalis derives from the word ‘ruderal,’ which refers to a plant that colonizes a disturbed, rocky, land.

Cannabis Ruderalis first evolved in parts of Central Asia, Eastern Europe, and modern-day Russia. It’s a part of the world where summers are short and winters are long. And with significantly less light available than other climes, the wonders of natural selection meant that Cannabis Ruderalis stopped relying on light cycles to control flowering.

Instead, autoflowering seeds flower based on time cycles, and this is the prime difference between autoflowering seeds and those which stem from Cannabis Indica or Cannabis Sativa species. A study published in Neurotherapeutics (2015) described how autoflowering, often seen as a beneficial characteristic, was specifically bred into hybrid varieties of cannabis for this very characteristic.[1]Gloss D. (2015). An Overview of Products and Bias in Research. Neurotherapeutics : the journal of the American Society for Experimental NeuroTherapeutics, 12(4), 731–734. … Continue reading

So Why Use Auto Flowering Seeds?

Autoflowering seeds offer various advantages. Firstly, they provide novice growers and curious gardeners with an easy way to grow cannabis that won’t punish them for lack of experience. Growers can set their plants in less than ideal conditions without strictly controlled light cycles, and they’ll still flower.

Autoflowering seeds are quick-growing. Many varieties begin to flower after only twenty days, and may even finish as quickly as seven weeks. Their short grow time means that outdoor growers can obtain several harvests even in short outdoor growing seasons.

Autoflowering plants aren’t as greedy as their photoperiod cousins. They thrive in more arid soil and don’t require much in the way of extra fertilizer and nutrients. This makes them an attractive option for novice growers and those who don’t want to undertake a complex feeding process.

RELATED  How Long Do Edibles Last?

Because Cannabis Ruderalis evolved in northern latitudes, it has the genetic armory within to deal with extreme temperature swings and imperfect conditions. As a result, autoflowering seeds are more resilient than alternative options and deal much better with pests, mold, and poor temperature regulation.

Autoflowering plants also tend to be smaller and more compact than other varieties. The Cannabis Ruderalis genetics, which form much of their genetic makeup, tend to reach heights of between thirty and sixty centimeters. This makes them a popular option for hobbyist growers with limited available space.

But while small plants and time cycles may sound like attractive traits, they also come with downsides.

The Drawbacks of Autoflowering Seeds

Just like everything in nature, there’s no such thing as a free lunch. While autoflowering seeds may seem like every cannabis grower’s dream, the fact is they come with some significant drawbacks.

Due to their small stature and quick grow times, autoflowering plants yield much less than photoperiod plants. Ten to fifty grams per plant is typical, while some experienced growers may extract up to one hundred grams per plant.

Autoflowering plants produce lower cannabinoid quantities than photoperiod plants. For those chasing potent medicine high in THC or CBD, then autoflower seeds may not be the best option.

No Good For Cloning

Cloning plants involves taking a cutting from a mother plant to skip the germination process. While it’s hugely efficient in photoperiod plants, the problem with autoflowering plants is that a cutting from a two-week-old plant means that plants must mature in as little as five to six weeks. As a result, there simply isn’t enough time for the plant to develop and mature, and yields suffer as a result.

Autoflowering plants require at least twelve hours of lighting per day, but many growers expose them to light for twenty-four hours. This assures an improved yield, but it also comes with additional expense. While those growing autoflowers may save on nutrients, they’ll likely pay more for indoor lighting than with photoperiod plants. 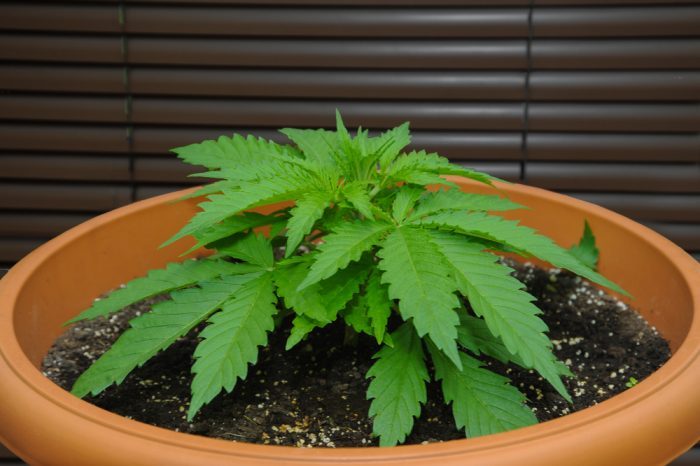 Training plants helps ensure they use the growing space optimally, and leads to better yields. With autoflowering plants, training must take place during the vegetative phase. This short two-week window means that growers must act quickly before growth advances.

The short amount of time spent in the vegetative cycle means that plants don’t require excessive nutrition. With a history of growing in nutrient-deprived soils, autoflowering seeds don’t require the same care and attention to nutrition. Among more astute growers, this results in considerable money savings.

With traditional growing methods, growers encourage the plant to grow an even canopy where bud sites exposed to abundant light produce the majority of the buds. With autoflowering varieties, such perfected canopies aren’t possible due to the quick grow time. As a result, growers should harvest buds from various sites on the plant and should allow bud sites lower down to develop by harvesting sequentially.

Simplifying the Art of Growing Cannabis

Autoflowering seeds offer advantages and disadvantages, but it is novice growers who perhaps benefit most from these easy-to-use seedlings. The removal of complications such as light cycling and nutrient ratios mean that the art of cultivating cannabis is just a little easier in autoflower grows.