What Can Cannabis do to Stop Muscle Wasting?

Does cannabis stop muscle wasting? Here’s what the research is saying about cannabis and cachexia.

Cannabis has proved itself as a method of treatment for appetite stimulation, helping chronically ill patients feel hungry enough to eat. From helping patients fighting cancer to individuals battling anorexia, doctors are utilizing cannabis as treatment. But can it help stop muscle wasting?

Muscle wasting, or cachexia, is a secondary symptom caused by severe illnesses such as cancer and HIV/AIDS. This condition is a dangerous one, since it often signifies deadly progression of the disease and its toll on the body. Scientists are now researching cannabis to see if it can help prevent the increased morbidity caused by muscle wasting.

Basically, cachexia, or muscle wasting, is the loss of muscle mass. And it’s not just any kind of muscle. Cachexia is the loss of muscle mass that includes lean muscle. It causes changes to body size, but does not necessarily cause the loss of body fat — though it can in some cases. The loss is so significant that it can lead to death, as it affects appetite, energy levels, and the body’s ability to survive. For patients with cancer or HIV/AIDS, the development of cachexia is a severe warning sign.

Doctors will attempt to treat the condition with pharmaceutical medications that increase mass and improve anabolism. They may also prescribe cytokine inhibitors and hormone therapy in an effort to try to enable the body to build and retain muscle mass. Nutritional supplementation and exercise have also been utilized to combat this condition. However, there are no standard guidelines, as the causes of cachexia differ depending on the disease of the patient.

And few patients actually succeed against muscle wasting. By the time this condition sets in, most who are battling cancer or HIV/AIDS are often approaching terminal phase. The loss of muscle mass increases their risk of death, as the body continues to become more and more malnourished. 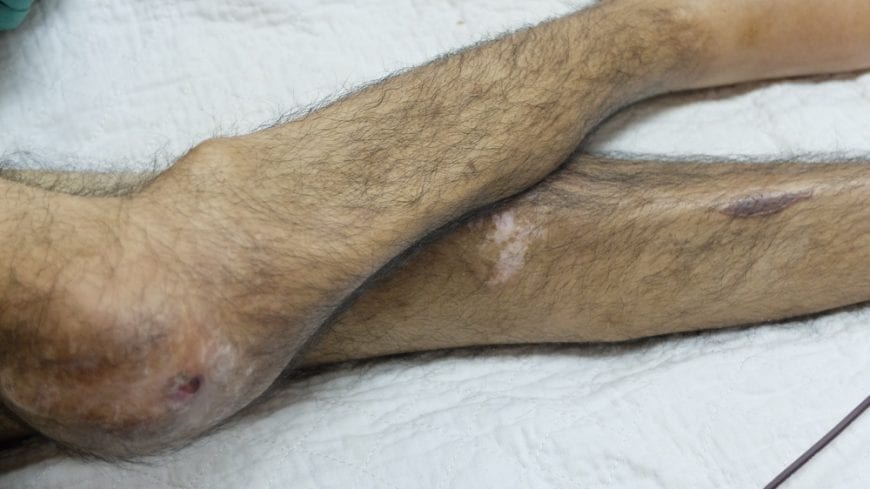 Cannabis has already been prescribed to patients undergoing chemotherapy, as it has been proven to help with nausea and loss of appetite. But while it may be effective in treating these kinds of cancer-related symptoms, science has yet to deduce whether it can actually help stop muscle wasting.

So far, the research hasn’t produced any verifiable results. A recent study published in the Journal of Cancer (2019) reviewed prior randomized controlled trials to ascertain whether cannabinoid therapy could slow the progression of cancer-caused cachexia. In their review, the authors did not find enough evidence to conclude that cannabis is effective against cancer-caused muscle wasting.[1]Wang, Jing, et al. “New Prospect for Cancer Cachexia: Medical Cannabinoid.” Journal of Cancer, Ivyspring International Publisher, 1 Jan. 2019, www.ncbi.nlm.nih.gov/pmc/articles/PMC6360413/.

However, the authors did note that a synthetic cannabinoid pharmaceutical called dronabinol has been used to treat AIDS-related cachexia. A prior study in Therapeutics and Clinical Risk Management (2018) showed that dronabinol could be an additional option for muscle wasting treatment.[2]Badowski, Melissa E, and Paa Kwesi Yanful. “Dronabinol Oral Solution in the Management of Anorexia and Weight Loss in AIDS and Cancer.” Therapeutics and Clinical Risk Management, Dove Medical … Continue reading

Yet, another study published the same year did not find evidence to support the use of cannabinoids to combat muscle wasting. The study, published in the Journal of Cachexia, Sarcopenia and Muscle (2018), reviewed nine studies of cannabinoids in palliative medicine, and found them all to have a moderate risk of bias. They concluded that none of the studies provided convincing, unbiased evidence that cannabinoids can help patients with cancer or HIV/AIDS related cachexia.[3]Mücke, Martin, et al. “Systematic Review and Meta‐Analysis of Cannabinoids in Palliative Medicine.” Wiley Online Library, Journal of Cachexia, Sarcopenia and Muscle, 5 Feb. 2018, … Continue reading

A girl being sick – The inability to hold down food due to chemotherapy nausea is a common cause of cachexia.

Can Cannabis Help With Quality of Life?

It appears that some current research is telling us that cannabis might not reverse muscle wasting. This comes even though it has the ability to stimulate appetite. The mechanics at play that cause the body to lose mass aren’t based on caloric intake alone. But keeping in mind that this devastating condition commonly visits patients in the last stages of their disease, could cannabinoids at least help improve their quality of life?

A study conducted by the Israel Ministry of Health sought to discover how cannabis could help patients in the advanced stages of cancer. This research was published in the European Journal of Internal Medicine (2018). In it, the researchers analyzed data from 2970 patients who had been treated with cannabis. Of the 2970 patients, 902 had died and 682 had ceased treatment. The majority remaining 1211 patients reported an improvement in their condition.[4]Bar-Lev Schleider, Lihi, et al. “Prospective Analysis of Safety and Efficacy of Medical Cannabis in Large Unselected Population of Patients with Cancer.” European Journal of Internal Medicine, … Continue reading

An Unexpected Growth in Quality of Life

However, take note that the data of the study comes from a company that sells medical cannabis.

What we can take away here is that more independent study is necessary. Researchers need to look into how cannabis can make end-of-life care more comfortable, specifically with cannabis. Next, they need to look into if cannabis could potentially increase body mass in patients with cachexia. But for now, there doesn’t seem to be a conclusive answer to whether or not cannabis can help.