What is shatter and how can medical cannabis patients best use it?

If you don’t know, don’t worry – patients often ask what shatter is. Here’s what you need to know about it: It’s a potent cannabis extract with a hard, translucent texture similar to glass. Shatter is famous because it often boasts THC levels above ninety percent.

Producers make shatter by stripping raw cannabis with a solvent under heat and pressure. This gives it a translucent appearance that is bright amber to dark yellow in color. Shatter gets its name from the glass-like physical texture that’s sometimes extremely brittle. Depending on the cannabinoid profile, other forms of shatter may have a more viscous texture, something that’s especially common in extracts that are extremely high in THC.

What is the THC and CBD Content of Shatter?

While shatter is more commonly associated with THC levels that sometimes exceed ninety percent, varieties high in CBD are increasingly common. CBD shatter targets the medicinal market and provides therapeutic levels of cannabidiol without any of THC’s intoxicating effects.

The primary ingredient of CBD shatter is CBD isolate. After extracting it from the hemp plant, CBD isolate undergoes a filtration process to remove any oils, lipids, waxes, and other plant compounds. An increasing number of producers are now reinfusing terpenes back into CBD shatter to enhance the medicinal benefits.

How To Make Shatter

Shatter production involves packing raw cannabis flower into a tube and stripping the plant compounds via the use of a solvent coupled with heat and pressure. The most common solvent is butane, a highly flammable gas that’s dangerous to work with. The use of liquefied petroleum gases (LPG) or ethanol are also common alternatives.

With the plant material stripped of the medicinal compounds, the next step is to purge the solvent from the resulting solution. Solvents, like butane, are damaging to health if consumed in high enough quantities. And a process known as purging helps ensure that minimal levels remain in the final product.

Purging a solvent from shatter involves using a vacuum oven that heats the product in a closed environment while subjecting it to lower atmospheric pressure. Once heated, the solvent releases in gas form before being left to cool and settle where it forms a thin sheet that turns into a yellow-gold color, similar to honey. 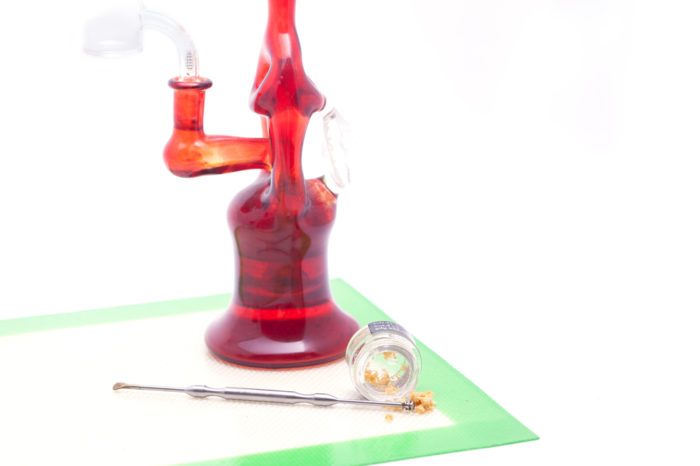 How To Consume Shatter

Dabbing involves preheating the nail with a butane or propane torch before dropping a small amount of shatter onto it, where it instantly vaporizes. Consumers then place a cap over the nail to capture the vapor before inhaling. Dabbing temperatures typically range between 250 – 320 degrees Fahrenheit, and excessively high temperatures can destroy some of the beneficial plant compounds such as terpenes. To counter this, some dabbing rigs have built-in temperature gauges that offer enhanced precision and a more tailored consumer experience.

Dabbing shatter provides patients with a potent dose far beyond that of smoked flower. While some forms of shatter merely contain THC and not much else, others contain additional plant compounds, including minor cannabinoids and terpenes for enhanced medicinal benefit and flavor.

While dabbing is a highly effective delivery method for many, recent studies cast a light on the safety of the practice. In a study [1]Alzghari, S. K., Fung, V., Rickner, S. S., Chacko, L., & Fleming, S. W. (2017). To Dab or Not to Dab: Rising Concerns Regarding the Toxicity of Cannabis Concentrates. Cureus, 9(9), e1676. … Continue reading published in Cureus (2017), researchers highlighted several potential dangers associated with dabbing. After analyzing shatter samples, they deemed eighty percent of them unsafe due to excessive solvent or pesticide residue, stating that they “could potentially trigger a toxidrome.” While legislation does exist within legal jurisdictions to ensure safe levels of pesticides and solvents, patients should be particularly wary of any home-made or black market shatter varieties.

Can Patients Use Shatter To Make Edibles?

For those who prefer to avoid dabbing, it is possible to add concentrates to edible recipes, but first you must put them through a process known as decarboxylation. Both THC and CBD require heat to convert these from their inactive acid forms, THCA and CBDA. The temperatures involved in dabbing complete this process automatically at the point of vaporization. But for edible use, manual decarboxylation is a must. 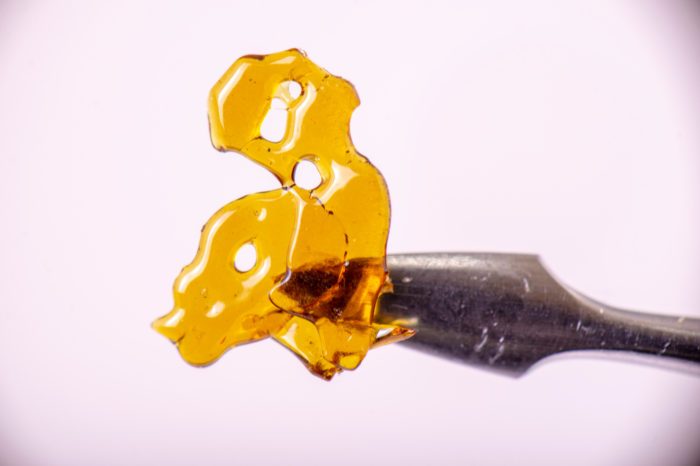 How to Store Concentrates Effectively

Any form of cannabis concentrate will degrade with time, and shatter is no different. The secret to slowing down this gradual decay is to minimize exposure to light, heat, and humidity. The best way to store shatter is to wrap it in parchment paper, put it in an airtight mason jar, and then place it in a dark cupboard away from the elements.

For long-term storage for periods of several months, you can freeze it to help slow the loss of potency further.

Shatter can be beneficial to any patient who requires a higher than average dose of THC. Those treating chronic pain often require higher doses than can be achieved with other formats. Accordingly, shatter and is sometimes the only option for effective relief due to an existing tolerance to THC.

The nature of a patient’s relationship with concentrates can only really be discerned by the patient. Many can maintain a healthy and therapeutic relationship with it. But, the high quantities of THC present in shatter mean that the potential for abuse is always there.

RELATED  The Latest Science on Bong Lung Has Consumers Worried

This is most common in recreational circles, where its effects can be extremely intoxicating in high enough doses. For medicinal patients, the risk appears when they stop using the medicine mindfully, and without intention. For a small number of people, the tendency to numb out on excessively high doses always exists. From both an economic and medicinal standpoint, patients should always look to medicate with the minimum effective dose.

When it comes to administering high doses of THC, tolerances can quickly rise. This means that patients require more for the same effect. It’s a self-perpetuating loop that won’t reset without some form of intervention.