This Genetic Test Will Tell You Which Strain is Your Match

The promise of personalized cannabis medicine is already here! That’s right – you can match your genetics and your cannabis.

What prevents people, even the sick and unhealthy, from using cannabis? There are two main reasons: illegality and personal fear of the unknown. While legislation is slowly catching up to public opinion on the first issue, a new test that claims to reveal users’ cannabis tolerance is helping people conquer the second. That’s right. You can finally understand how your genetics and your cannabis mix.

The new kit, called TestMyTolerance, comes from a company called DNA Labs. It promises to mine the genetic material present in a cheek swab to identify specific genes that are responsible for determining how your body interacts with cannabis.

How to Test Your Tolerance

Priced at $129, the kit operates in much the same way that similar medically leaning DNA tests function. By comparing your specific genetic material to the science of cannabis studies, the company can inform users about the kind of effects they can expect from cannabis and cannabis-related products, like CBD oil.

For example, the test can determine whether or not someone has a higher risk of experiencing psychosis from THC.

To do so, it makes use of scientific studies, such as this one from Translational Psychiatry, which identifies a specific variant of a genes that has been shown to be connected to the psychosis risk from cannabis use. Users who have a variant of the AKT1 gene known as rs249732, have been scientifically shown to have an increased risk of developing psychosis following cannabis use. And while this is a rare phenomenon, the acute risk has been presented many times as a warning for trepidatious first-time users. The kit tests for the presence of the gene mutation, and guides users about the best way to proceed.

While it’s great for people who have gene mutations, it’s also an ironclad way for inexperienced users to calm their nerves about trying a new psychoactive substance. That’s especially important for anxiety sufferers, who could greatly benefit from the promise of medicinal cannabis but might, understandably, be afraid to make the leap.

The test can also clue you in as to how sensitive your body is to the presence of THC and CBD. In much the same way that a single cup of coffee can jolt some people into jittery anxiety, wake others up, and barely register for some, THC and CBD are chemicals that do not treat users equally.

What do Genetics Have to Do with Cannabis Tolerance

Knowing your genetic limits is especially useful for former users who may be interested in getting back into cannabis use (in legalized areas) by only dipping a toe into the waters. For example, if someone hasn’t used cannabis since the 60s and isn’t sure how a puff or two may affect them today. And, in the age of edible, it’s even more important to understand your body’s limitations.

Before tests, the best way to do this was by starting out small and increasing very gradually. Now, it’s possible to have more information, allowing users to make decisions that better align with their cannabis use goals.

The test reveals which strains may be best for use. It does so by using your genetic profile to determine how fast your system metabolizes THC. It also shows how often you should ingest. People whose bodies quickly metabolize THC may need longer-lasting strains. These people could also use varieties with more potent THC. Those who metabolize THC slowly may feel its effects for a longer period of time. 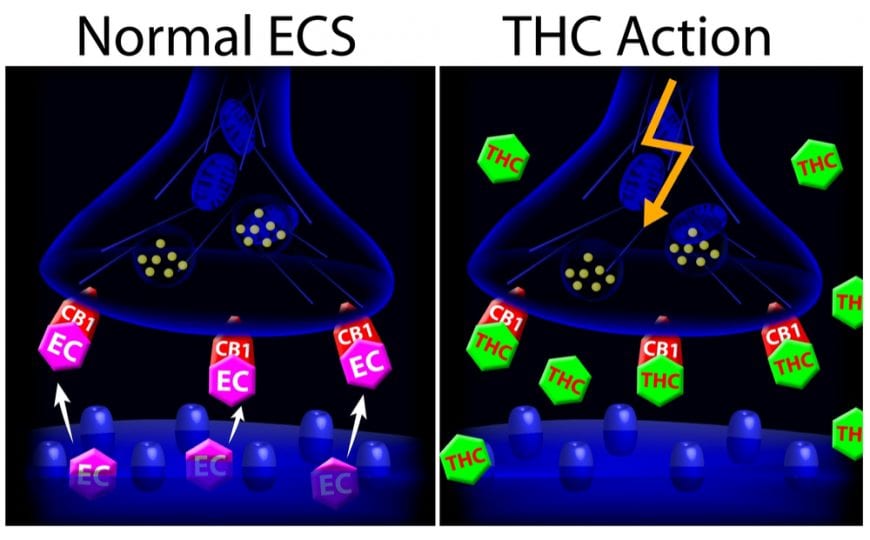 THC and the ECS

Genetic testing could also help determine how medicinal cannabis will interact with the body on a micro scale. We know that the human body’sendocannabinoid system is responsible for interacting with cannabis. But what scientists are discovering is that the endocannabinoid system is not a one-size-fits-all operation. Slight differences in humans determine how the body processes cannabis — and not just the active ingredients, THC and CBD, but the additional chemical compounds found within the plant (like terpenes).

CBD oil has become a popular substance for both cannabis users and pain sufferers alike. Now, thanks to this test, people may be able to determine how to make the most out of it. Some patients may find better relief by using higher doses of CBD. Or, perhaps by using the products in different ways. For example, some might like leaving a CBD patch on for a longer period of time to increase exposure. Knowing that can be a godsend for patients who are struggling to find a non-opioid pain reliever. At the same time, it can be just as good to relax after a long day.

The area of personalized medicine interrelating with genetics is the way of the future, and cannabis will be a part of it. TestMyTolerance may be the first kit to specifically explore the links between gene mutations and cannabis experiences. It certainly won’t be the last.